And, as logically follows: 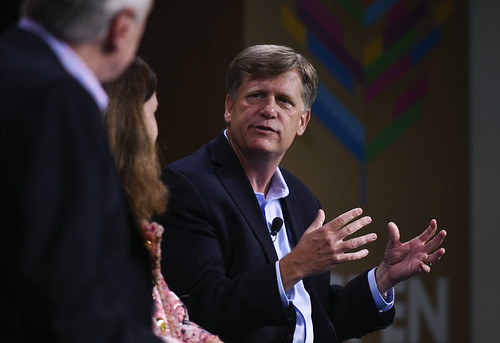 This fucking seditionist traitor is out of control. Mr. Mueller, please hurry!

WH press sec Sanders acknowledged that Putin talked to Trump about his interest in prosecuting financier Bill Browder and former US ambassador Michael McFaul. she declined to rule out US cooperation in that effort, saying Trump would consult his national security team

Let’s recall why Putin began making outrageous, false accusations against @McFaul: Mike stood up for human rights and against Russian oppression. That terrified Putin. The fact that @realDonaldTrump won’t stand up for an American patriot is a travesty https://t.co/Z6zlPYGV5Y

For those keeping score at home, this means Putin asked the President to let him get his hands on a former US ambassador to Russia, @McFaul, and man who successfully lobbied for one of the primary sanctions against Russia. And the WH can’t say how POTUS responded. Remarkable. https://t.co/Ly3vPuP2vS

.@maggieNYT asks @WHPressSec abt Russia’s call to intv @Billbrowder & @McFaul: “Pres will meet w/ his team & we’ll let you know when we have an announcement on that front.” Acknowledges the topic was discussed privately bween Trump & Putin.

America’s diplomats deserve to know our president supports their work & won’t serve them up in a deeply misguided attempt to gain the approval of hostile foreign leaders. @realDonaldTrump must refuse Putin’s request. https://t.co/oi9TVoQ9tj

While everyone is outraged about @Mcfaul the Russian prosecutor Yury Chaika (same one involved in the Don Jr-Russia meet) issued a threat to @Billbrowder yesterday. They will not ‘let him sleep soundly’ Notice the graphic used. We as Americans need to put an end to this insanity pic.twitter.com/ThkycSG924 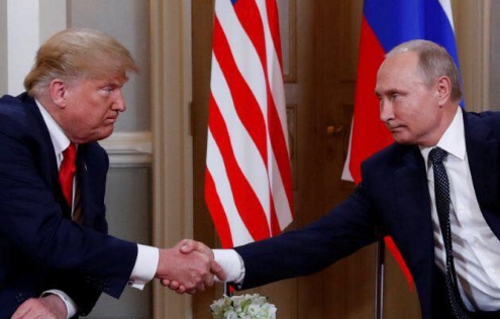 One of the most explosive exchanges from the Trump-Putin press conference is missing from the White House transcript. But why? @UriLF reports: https://t.co/mYmFx7XTWC

Understanding what Putin said depends on what you watch or where you look. If you watch the video of the news conference provided by the Russian government, or by news outlets such as PBS and the Associated Press, you will hear the Reuters reporter Jeff Mason ask a bombshell of a question: “President Putin, did you want President Trump to win the election and did you direct any of your officials to help him do that?”

Putin then responds with a bombshell of an answer, according to the English translation of his remarks that was broadcast during the press conference: “Yes, I did. Yes, I did. Because he talked about bringing the U.S.-Russia relationship back to normal.”

In preparation for a public statement meant to mitigate the damage his news conference with Vladimir Putin, the Washington Post reports that President Trump “brought four pages of handwritten notes to a meeting with congressional leaders and in his own distinctive scrawl, he added notes to the prepared comments. And in several instances, he struck out things he planned to skip.”

Photos of the pages taken by a photographer at the meeting show that Trump struck out a line about bringing “anyone involved in that meddling to justice.”

At his closed White House press conference, Trump said he meant to say that he saw no reason why it wouldn’t be Russia that interfered in the 2016 presidential election. And “it could be other people, also.”

As Katie Tur just pointed out, he repeated his “error” to Sean Hannity last night.

Trump also said this at Helsinki the press conference: "I have great confidence in my intelligence people, but I will tell you that President Putin was extremely strong and powerful in his denial."

It wasn't as if he just misspoke once. Trump made similar points multiple times.

The Cheato said he has “the strongest respect” and full confidence in the U.S. intelligence community’s assessment that the Russians did, in fact, meddle in the 2016 election. Even though it was much more than one word that conveyed his subservience to Putin.

So, bygones. No treason, no collusion!

That’s not a joke. He really said that.

Trump on summit: “i entered the negotiations w/Putin from a position of tremendous strength”

"In a key sentence in my remarks I said the word 'would' instead of 'wouldn't.' The sentence should have been, 'I don't see any reason why I wouldn't or why it wouldn't be Russia,'" President Trump says https://t.co/ZU0DDFnp0P pic.twitter.com/8FfCRAsCXQ

"I guess he gets points for being creative there," @DanaBashCNN says of Trump's explanation.

Trump told a whole story about how confused he supposedly was about why everyone was upset about the Helsinki presser. Claimed he asked for a transcript and read the transcript so he could understand why folks were upset. Then talked about how he noticed he didn't say "not". 🤔

Nope. This is international diplomacy, not a reality TV show.

@POTUS Trump on air doing damage control by trying to completely retell the last week as if we didn’t see what happened with NATO, UK and Putin yesterday

Is… that an acknowledgement that Russian efforts helped him?

Let’s see if the media do their jobs.

It doesn't matter if anyone believes him. Now he has a shield. That's how this stupid reality game show called politics works now. https://t.co/6rGJL2fSeJ

Russia continues to say they had nothing to do with Meddling in our Election! Where is the DNC Server, and why didn’t Shady James Comey and the now disgraced FBI agents take and closely examine it? Why isn’t Hillary/Russia being looked at? So many questions, so much corruption!

And they’re lying. The President can either believe Russia or he can believe our country’s intel chiefs, generals, cabinet secretaries, and diplomats who’ve all said the same thing: Russia interfered in the 2016 election, and they’ll be back in 2018. https://t.co/qny9WIyJkb

The President can either believe his Director of National Intelligence Dan Coats, or he can believe Vladimir Putin. https://t.co/N7DasNkWBR

The President can either believe his Secretary of State and former CIA Director Mike Pompeo, or he can believe Vladimir Putin. https://t.co/4HGSNgIrdp

The President can either believe his FBI Director Chris Wray, or he can believe Vladimir Putin. https://t.co/s26c4Q0N5k

The President can either believe his NSA Director and head of US Cyber Command General Nakasone, or he can believe Vladimir Putin. https://t.co/DR1tImRfjy

The President can either believe his Secretary of Defense Jim Mattis, or he can believe Vladimir Putin. https://t.co/b6F4hQi2F2

The President can either believe the unanimous conclusion of our intelligence community, or he can believe Vladimir Putin. https://t.co/LLak67wbuh

Reminder: our entire IC leadership stands by that conclusion. https://t.co/S6NokQT8ht

Make no mistake: the President just gave Russia the green light to once again interfere in US Elections.

Cooper said Peters referred to a “cult of Trump.”

“Yeah, I think a lot of Trump supporters are so embarrassed by how it has turned out, that they just cling to him,” he said. “They won’t let facts penetrate their reality. I am startled by relatively educated people and military veterans who still insist that Trump can do no wrong. That he is some sort of messiah, and I part company with their views.”

“You have first-hand experience with how Russian intelligence operates, do you believe that Vladimir Putin has some grip on Trump,” Cooper said.

“I am convinced that Vladimir Putin has some grip on Trump. When I first learned of the Steele dossier, it rang true to me,” Peters said.

“That is how the Russians do things. And before he became a candidate for president, Donald Trump was the perfect target for Russian intelligence. Here is someone who has no self-control, a sense of sexual entitlement and intermittent financial crisis. Made to order for seduction of Russian intelligence. I hope I am wrong.”

He said when Christopher Steele put together his dossier, “when you look at Trump’s behavior patterns, his unwillingness to create problems with Russia even as he attacks NATO, how can he not draw the conclusions that President Trump, the president of the United States, is frightened of Vladimir Putin and his grip?”

“Without exaggeration, the Mueller investigation is the most important of my lifetime, and I am 66 years old. I lived through Watergate. Anderson, it is about a fundamental assault on the Constitution by the president of the United States.”

The way it works is, Russian oligarchs give kickbacks to Putin for the money that allows them to live luxurious lives all over the world. Making it impossible for them to do so in one of their favored locations will pressure Putin:

Looks like the UK National Crime Agency is going to start targeting Putin cronies with Unexplained Wealth Orders to confiscate their UK assets. If true, this will be a powerful step https://t.co/h4NoMXajln

Gee, I wonder why? I can’t wait until this traitorous piece of shit rots in prison:

“It was the only foreign issue, or foreign leader, I should say, being tested at the time I was there,” Wylie told Democrats from the House Judiciary and Oversight committees, according to excerpts the lawmakers released today drawn from a Tuesday briefing with Wylie. Under Bannon’s instruction, the firm discussed Putin with focus groups and was “also testing images of Vladimir Putin and asking questions about Russian expansion in Eastern Europe,” Wylie said.

Former president Barack Obama had a tense relationship with Putin. Trump said he could do better but felt stymied by the media, Congress and special counsel Robert S. Mueller III’s probe into Russia’s interference in the 2016 election.

Any conciliatory move he made toward Putin came under heavy scrutiny. “When will all the haters and fools out there realize that having a good relationship is a good thing,” Trump tweeted in November. “They are always playing politics — bad for our country.”

Privately, he complained to aides that the media’s fixation on the Mueller probe was hobbling his effort to woo Putin. “I can’t put on the charm,” the president often said, according to one of his advisers. “I’m not able to be president because of this witch hunt.”

As the months passed, the president’s options for improving relations with Russia narrowed. In late July, Congress overwhelmingly approved new sanctions on Moscow that were widely seen as a rebuke of Trump’s efforts to reach out to Putin. It took aides four days to persuade Trump to sign the bill, which had cleared with a veto-proof majority. 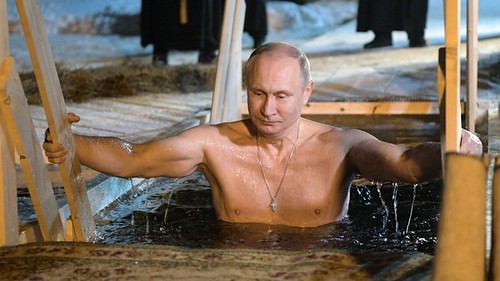 Oh, this is hilarious:

One text that Page sent Strzok early on the morning of Nov. 9, 2016, has dominated the conservative media world this week, serving as a springboard for a Republican conspiracy theory suggesting that the nation’s premier law enforcement organization was plotting a coup against Trump within hours of his stunning victory.

“Are you even going to give out your calendars? Seems kind of depressing,” Page, a FBI lawyer, wrote in the text to Strzok from her FBI-issued phone. “Maybe it should just be the first meeting of the secret society.”

Republican lawmakers seized upon the “secret society” reference this week, claiming to see sinister motives, and it started popping up all over cable news chyrons. But, in fact, it was almost certainly a joke, a bit of gallows humor after an election that featured Russian interference.

So what was that “calendars” reference all about? Out of context, it’s a bit confusing. But the backstory is actually kind of funny. The New York Times first reported that the “calendars,” which the Times said had a “Russia theme,” were a gag gift for those working on the early Russia probe.

A source familiar with the text messages filled HuffPost in on the details. It turns out that, as a joke, Strzok had purchased calendars featuring “beefcake” photos of Vladimir Putin doing manly, tough-guy things like riding a horse.