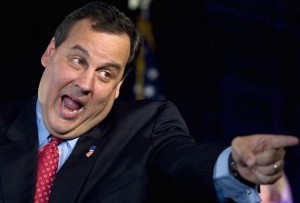 NJ Gov. Chris Christie and his advisors are trying to sell him as a “principled” man who does the right thing no matter what, but a closer look reveals an egomaniacal political hack who is a lot more concerned about his image than anything else. Now he blames a good little wingnut soldier like Bret Schundler for his very expensive temper tantrums, and apparently his major decisions are being dictated by the local right-wing talk radio:

Before rejecting a compromise with teachers that would have won New Jersey a $400 million federal education grant, Gov. Chris Christie’s main objection was that it would appear that he had given in to the teachers’ union, a former education commissioner testified on Thursday.

The governor, who had battled the union all year, said “that he was not going through the fire with all of their attacks on him merely to cave in to the union,” the former commissioner, Bret D. Schundler, told a State Senate hearing investigating the loss of the federal grant. “And he said that emphatically and for a rather extended period of time.”

Mr. Schundler recalled that in his conversation with the governor, in May, he had explained that it was the union that had given ground, and that the administration had won nearly everything it wanted. “When the governor came to understand that, his concern became more about how it would be perceived,” he said.

[…] Mr. Christie fired Mr. Schundler, a fellow Republican, in August, after New Jersey finished 11th in a competition, called Race to the Top, that rewarded the top 10 states.

A minor omission in New Jersey’s application was one reason the state lost the contest. The mistake cost the state 4.8 points, giving it a score of 437.8, just 3 points behind 10th-place Ohio.

But New Jersey lost at least 14 points because the teachers’ union, the New Jersey Education Association, refused to endorse the application; the added points from the union’s endorsement would have put the state into fourth or fifth place.

The union had agreed in late May to a draft agreement negotiated by Mr. Schundler, signing on to almost every change called for by the governor, including paying teachers based partly on their students’ performance. There was one major exception, Mr. Schundler said: The union would not endorse giving up the principle that when tenured teachers were laid off, it had to be in reverse order of seniority. Mr. Schundler said that that was not a major issue, because such layoffs were rare, and the governor could pursue the change whether or not it was included in the application.

The news release announcing the deal with the union intentionally avoided claiming victory for the governor, Mr. Schundler testified, so that the union could more easily sell the plan to its members. But the next morning, he said, the governor called him, irate because a talk-radio host, Jim Gearhart on WKXW, “was saying he caved in to the union.”