Back in September, intrepid blogger Mike Stark broke a story claiming that Rep. John Boehner was having an affair with a lobbyist for the printers association. At the time, Stark wrote:

“Several hundred paper-making jobs were lost in his district and he refused to do anything about it at the same time he was sleeping with a lobbyist for the printing industry that was very happy to get their cheap paper from China. Gotta give it to Lyons though! She’s one hell of a lobbyist!

It was greeted with a resounding silence from the corporate media.

But today, the National Enquirer will carry the story. 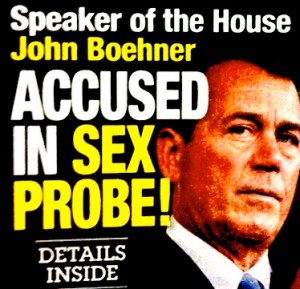 Stark in an interview with Sam Seder today denied speculation (including that from Down With Tyranny’s Howie Klein) that former hate radio host Rep. Mike Pence (IN-6) or someone from his staff was the source for the story. He also posted this on his website:

Several days ago, my friend Howie Klein reported at his blog, Down With Tyranny, that Mike Pence was spreading the John Boehner/Lisbeth Lyons story.

Normally, I’d not feel the need to respond to what others write, but this case is different. First, I can’t have people assuming that Howie got his information from me, because implicit to that assumption would be the fact that I can’t keep confidences with my sources. Second, to the extent that people may read the two blogs and put together the idea that Howie got his information from me, they would be ill-informed. And since I think I am in the business of more fully informing the public, allowing that misunderstanding to fester cuts against what I am trying to accomplish with StarkReports.com.

Look, I’m obviously a partisan. And the idea that Mike Pence may be circulating these rumors makes for some pretty satisfying and delicious palace intrigue. But, as much as I wish it were so, Mike Pence was not a source for my reporting.

With that said, as fate would have it, I ran into Representative Pence at a Robert Hurt campaign event over the weekend. I was able to ask him if he was spreading the story. He looked down, pursed his lips and shook his head as if to deny. Most people I know would have taken that as a flat denial, and I’m certain that’s how it was intended.

But here’s another secret… In law school, when you are taking depositions, you are taught that the answers to “yes or no” questions must be spoken. I’m not sure if that is because a court reporter cannot record “witness nodded their head in the affirmative” or “witness shook head to indicate the negative” or if it is because sworn testimony must be spoken aloud for it to be a matter of record. Anyway, Washington has definitely jaded me. I have extreme difficulty accepting anything our elected leaders say as gospel; I’m a natural (extreme) skeptic. So all I can do is report what happened and let y’all make up your own mind.

Stark also says that he doesn’t think there’s an attempt by members of the House GOP caucus to take Boehner out — mostly based on his own opinion that it doesn’t make sense.

I don’t agree. I think this has the signs of a classic hit. We already know the House ideologues weren’t thrilled about having Boehner as Speaker — as conservative as he is, he looks like a flaming liberal compared to some of the new cowboys. It may not have been Pence, but I’ll bet it was coordinated with him.

Mike Stark asks why they’d wait until he was already Speaker. I think it’s pretty obvious: They want to purge the party, and they want to do it from a position of seeming invincibility. What better way to terrify the occasionally-moderate members than by taking down the Speaker? For maximum effect, Boehner would have to be in power for the attack to scare the crap out of the other House Republicans.

Look at what’s happening: They’re already threatening primaries against some very conservative Republican senators, people like Orrin freakin’ Hatch. You really think these people are above a purity purge?

Gay rights are also a real flash point in the Republican party right now, since GOP Proud signed on as a co-sponsor of this year’s CPAC conference for the second year in a row. And just like last year, the right-wing Christian extremists wet their pants at the very thought, saying it was a movement away from conservative principles (yeah, like racking up a record deficit under Bush was a conservative principle, right?).

There’s a definite split in the party. Prominent wingnuts like Jim DeMint and far-right groups like the Family Research Council. the Heritage Foundation and the American Family Association said they won’t attend.

The extremists are feeling their oats. My guess is, they’ll publicly flex their muscle by taking out Boehner.

Boy Culture got hold of an advance copy and posted this yesterday. 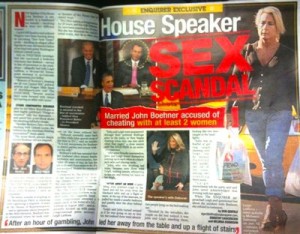