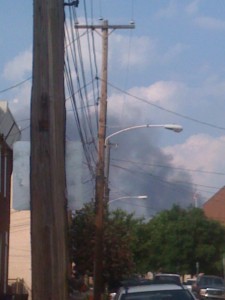 Even though I was three miles away, I could see the dark black plume of smoke. Something near my house was on fire.

As I finally drove down my street, a thick haze of smoke hung like fog. I asked my neighbor what happened. “I don’t know, it’s some industrial site near the river,” she said.

Then the UPS driver showed up to make a delivery, and he filled us in. It was a computer recycling plant, and the stuff stored outside on pallets caught fire from someone smoking. “Oh swell,” I said. “All that toxic plastic in the air.” No wonder my eyes were burning.

Despite the half-dozen or so industrial sites near the river, there are no fire hydrants down there, the driver told us. “They had to come up here to fill their trucks, and they called for a pumper truck to pull water from the Delaware River,” he said.

My entire neighborhood just stinks and my head hurts — in a different way than it did this morning.

One thought on “Fire”