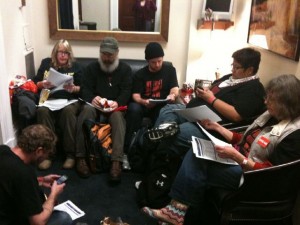 This was written by Janalee Filer, an unemployed worker from Pueblo, Colorado. (She’s the blonde woman on the left.) She was in D.C. yesterday to tell her congressman she wants to work as part of Take Back The Capitol, an event organized by unions and activist groups:

I came to Washington, D.C. with a group of fellow Coloradans to tell our Congressman, Representative Scott Tipton, to create jobs and put Colorado back to work. What I heard back from him fell short.

As a construction worker for 26 years, I moved up through the ranks, saw my wages improve over the years and really enjoyed my job. But over the past 10 years my wages steadily declined. In 2008, my wages fell to $10 an hour, that’s $2 less than what I made in 1985!

I decided to leave work and take care of my ailing grandparents for a time, trusting that I’d have a job when I was ready to return. Well, here I am trying to get a construction job now for 2 years without any luck. My unemployment insurance has run out, and I am desperate for a job.

Unfortunately, my story isn’t unique. Pueblo, where I’m from, is experiencing an unemployment rate above 10%. Every family is affected. I believe in extending unemployment insurance for other people who still qualify, who are still struggling just to get by, who are still searching high and low for work.

That’s why I marched into Rep. Tipton’s office today and demanded a meeting. There is a crisis in Pueblo—and across the country—that requires leadership and commitment, and so far we have seen neither from our representative.

Rep. Tipton came and spoke with us for a few minutes in the lobby. When we asked him if he would vote to extend unemployment insurance, what I heard is that he is “pondering” it. I don’t understand how there is even a question about it!

One of his aides met with us in the lobby as well. When we asked him again about if Rep. Tipton would vote to extend the unemployment insurance, he told us he had to listen to both sides and then he told us a strange story. He heard about a disheveled guy going in for an interview and purposefully not getting hired just to get an unemployment check. We all sat there for a minute in disbelief. When I realized, that he was saying that my representative was considering not voting for unemployment insurance because he thinks there are lazy people milking the system, I was compelled to act.

I jumped out of my chair and told the aide that there are a lot more unemployed, hard working, good valued people in Pueblo and across Colorado who are looking for jobs than a handful who may not want work. I said, “I’ve worked for 26 years in road construction and paid into the system. Here I am, without a job for 2 years and my unemployment insurance has run out. I can’t milk the system. I want to work. What will you do for people like me?”

It was so offensive to hear him say he thought the unemployed were largely a lazy group looking for a handout. I am looking for work every day.

This visit actually opened my eyes to how Congress thinks—they live in a different reality. I didn’t expect to hear that they think of the unemployed as people just looking for a handout. It was shocking.

Congress is supposed to be supporting the people, their constituents. I came to him, basically begging for help, and they told me they wouldn’t help because I am lazy.

Well, lazy I am not.

I will be writing more to my local newspaper, organizing my neighbors, and speaking out more. I want to tell my Coloradans back home not to lose hope. You need to raise your voice. They can ignore a few of us, but they can’t ignore all of us. Let’s unite. It takes everyone.

And of course, I’d be very dismayed if any unemployed readers called Rep. Tipton’s Capitol Hill office (202-225-4761) and told them what they thought of his position.