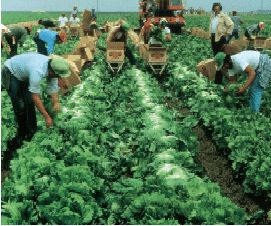 Driving in South Georgia the other day in the state’s agricultural belt, I heard an interesting interview on the radio with the president of the Georgia Fruit and Vegetable Growers Association, Dick Minor, regarding the impact of HB 87.

Last year, Georgia Governor Nathan Deal signed into law HB 87, a law that was modeled after Arizona’s SB 1070. Beginning in July 2011 police may investigate the immigration status of “suspects.” The impact on the state’s harvest season was heavy. Losses were estimated at $390 million dollars and caused a loss of 40% of the spring harvest labor. There were 11,000 job openings in Georgia for farm labor as many migrant workers just skipped the spring harvest before the law went into effect. “It had an immediate impact of workers not wanting to come to Georgia out of fear of being targeted for immigration,” Minor said in the interview.

In June, 2011, the Governor approved a program that farm jobs would be offered to unemployed parolees. Governor Deal issued this statement from his office, “I believe this would be a great partial solution to our current status as we continue to move towards sustainable results with the legal options available.”

What could possibly go wrong?

The parolees didn’t work out well with most leaving these jobs within a week.

“I mean, you have to imagine being in 100-degree days for 10 hours, and, you know, very physically demanding work, stooping down, running, lifting. You’ve got to be, sort of, trained, almost like an athlete. You’ve got to be trained to be able to do it, and we offered open employment to them all summer long, and we had just a constant turnstile of people coming and going.

And nobody was excited about doing it. A lot of them did it for several days, but none of them lasted.”

This season prison labor will be tested.

“The Corrections department has sent ten transitional inmates from Smith State Prison to work in a packing and grading facility run by an onion grower in Glennville, which is near Vidalia.  Transitional inmates are in the process of completing their prison sentences.

Part of the problem is that it is the perception that the migrant farmer labor is an unskilled workforce.

Minor speaking in the interview regarding the skills of the migrant worker:

“Well, first of all, the fallacy that we’re using cheap labor is not true. I mean, we pay these people pretty well. Also that just anybody can come do this job is also a misnomer. We consider these people skilled workers because they are pretty much professional harvesters, and they’re even skilled to particular crops.

So people harvesting watermelons may not be able to pick peaches, and people picking blueberries may not be able to pick peppers. So certain crews that work in certain crops, and they do that year-round, as you know it’s very tough work. It’s very tough conditions – long hours. You’ve got to be in really good physical shape. You’ve got to know the process of harvesting crops.

And in order to make good money, because so much of it’s done paid by the piece, and when I say good money, I’m talking about $15 to $20 an hour, you’ve got to be really proficient at the job. So we could offer locals or domestic workers more money. They still haven’t had a track record of being able to do the work in a timely manner and – nor do they want to do the work.

I mean, we have them come out here, but they usually don’t stay. They don’t stay more than a day or two, and they’re off to find another job.”

Well, I guess this throws out the argument that these migrant workers are taking away jobs from Americans. How many Americans are qualified to do this kind of work?