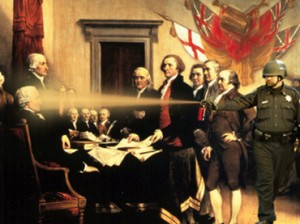 Remember the pepper-spray cop and UC Davis Chancellor Linda Katehi, the person ultimately responsible for the clownishly brutal treatment of students by campus cops? UC has agreed to settle the suit brought by students. From Truthdig:

The University of California on Wednesday reached a settlement with the 21 UC Davis students and alumni who were pepper-sprayed by campus police during what was otherwise a peaceful demonstration last year in support of the Occupy movement.

Each of the protesters who were sprayed will receive $30,000 from the UC system. But wait, that’s not all.

The agreement, which must still be approved in federal court, also calls for UC to pay a total of $250,000 to the plaintiffs’ attorneys and set aside a maximum of $100,000 to pay up to $20,000 to any other individuals who join the class-action lawsuit by proving they were either arrested or directly pepper-sprayed, a university statement said.

In total, the UC system will pay out nearly $1 million in the settlement.

I wouldn’t have settled unless the school agreed to fire Katehi.

Footnote: What happened to the pepper-spray cop, Lt. John Pike, after he became an Internet meme? Did the CIA hire him to work at a black ops site?