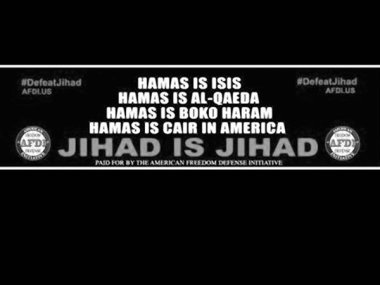 *Here’s what the headline refers to.

This is Pam Geller’s hate group putting up these disgusting ads. Geller is the wingnut blogger who, through her batshit crazy blog “Atlas Shrugged”, devotes her life (and makes nice bit of cash doing so) attacking the usually-imaginary “Islamic threat.” Everything is a jihad, she attacks at fever pitch, and the louder she gets, the more money rolls into her group. (Not that she needs it, after her $4 million divorce settlement and then a $5 million insurance policy when her ex died.) She is, truly, a dreadful person. I hope passengers can exercise their own First Amendment rights by defacing these signs: 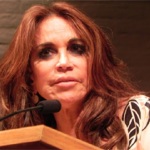 When an anti-Islamic group decided to advertise on city buses and billboards this fall with photos of a terrorist poised to behead an American and a Muslim leader smiling at Adolf Hitler, transit officials in New York and Washington, D.C., huffed their disapproval – but allowed the ads to run.

They had no choice, they said, because the ads were protected under the First Amendment.

“The most fundamental principle of the First Amendment is that you may never bar any message based upon the content of the message,” said Burton Caine, a law professor at Temple University and past president of the Philadelphia chapter of the American Civil Liberties Union. “This is absolutely prohibited, what SEPTA is doing.

“Everybody has this same idea that they like the First Amendment,” Caine said, “but when the speech is offensive, people will make all kinds of excuses why it’s not protected. The whole point of the First Amendment is to protect speech that offends. No exceptions.”

A federal judge said as much in 2012, ruling that the AFDI could post ads in New York City and Washington, D.C., that compared Muslim jihadists to “savages.”

Here’s Pam in classic wingnut attack mode, explaining to Ron Reagan Jr. that she knows his father better than he does:

6 thoughts on “We know who the real savage is, Pammy”