The Census Bureau’s latest headline numbers on income, poverty and health insurance received wide coverage: The poverty rate fell in 2013 while real (inflation-adjusted) median household income was little changed and the share of Americans without health insurance coverage fell. Here’s a look behind the headlines, courtesy of my Center on Budget and Policy Priorities colleagues’ deep dive into the Census reports, and a few reminders about how better policy could produce better results.

A significant drop in poverty is always welcome, but last year’s decrease was only the second statistically significant one in 13 years (see chart). Moreover, at 14.5 percent the 2013 poverty rate was still a full two percentage points higher than in 2007, before the Great Recession, and 45.3 million Americans were poor last year. Similarly, real median household income (the dividing line between the richer half of households and the poorer half) was little changed from 2012 and 8 percent lower than it was in 2007. 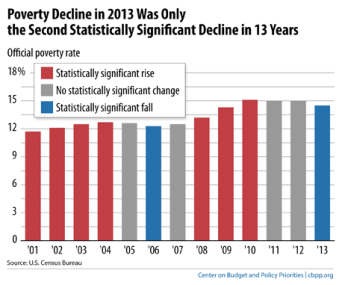 Chart on poverty decline in 2013
As I argued previously here, our austere budget policies of recent years have dragged out the jobs slump that followed the recession. That’s an important reason why median incomes stayed flat last year and the poverty rate did not drop more.

We shouldn’t be surprised that in an economic recovery that has left workers behind, the Census data show income inequality remaining historically high. CBPP reports that the share of the nation’s income going to the bottom fifth of households (3.2 percent) is tied for the lowest level on record, while median income of the top fifth of households was more than 12 times higher than that of the bottom fifth for the first time on record, with data back to 1967.

One thought on “They made the recession worse”