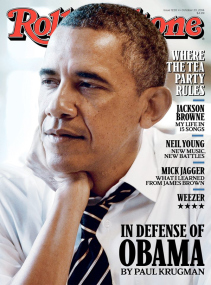 I have to admit, I didn’t even bother reading the article praising Obama when that issue came in the mail — because Krugman, of all people, should know better. (Once Matt Taibbi left, I figured Jann Wenner would have to justify the magazine’s all-out push for Obama in the 2007 primaries.) Turns out I wasn’t the only person who said “WTF?”. Thomas Frank in Salon:

What are the numbers on public cynicism today? Well, thanks to a big assist from the shutdown-crazed lunatics in the House of Representatives, public trust in government islower today than it has been since they started keeping records. For the executive branchspecifically, the numbers are comparable to those of the final years of the Bush administration. And the inevitable consequence appears to be headed our way next month.

Why is this important? Aside from the obvious and direct reason—that Obama was supposed to restore public faith in government and achieved the opposite—we need to reconsider the role the mighty righties play in the liberal imagination. If we want to believe that Obama has been a consequential and a great president, then the only way to explain his many failings is as a function of his right-wing opposition. He didn’t get the king-sized stimulus we needed, liberals often say, because the right wouldn’t give it to him. He didn’t break up the banks or prosecute the banksters because the Tea Party wouldn’t let him. He didn’t get single payer or the public option because Republicans wouldn’t go along with that. Ditto for card check, antitrust enforcement, cramdown, renegotiating NAFTA, and the rest of the items on the long, doleful list of liberal priorities.

However, anyone who has followed the news for the last five years knows there is another factor to be taken into consideration here: Obama didn’t do these things because he or his advisors didn’t want to do them. Oh, there were ways to get many of them done, especially in 2009 and 2010, when the world was at Obama’s feet, begging for action. (The only possible obstacle in those days was the filibuster power of Senate Republicans, which should have been—and eventually partially was—taken away.) But the Democrats’ heart wasn’t in it. They didn’t even try.

In this connection, allow me to quote Paul Krugman himself, in his column for July 18, 2010, on the matter of the then-looming Tea Party triumph: “The best way for Mr. Obama to have avoided an electoral setback this fall would have been enacting a stimulus that matched the scale of the economic crisis. Obviously, he didn’t do that. Maybe he couldn’t have passed an adequate-sized plan, but the fact is that he didn’t even try.”

And that, folks, leads us to the greatest disappointment of them all: This administration’s utter failure of imagination. I admit that this beef might be peculiar to me, since one of the reasons I was once so psyched to see Barack Obama in the White House is because I thought he was a man who respected learning, intelligence, new ideas. Maybe he still does, in his private life. But as president, he couldn’t seem to see what is obvious to everyone who is not a regular golfer at Congressional: That ignoring the conventional and facing down the Republicans and doing the right thing—on the stimulus, on the banks, on inequality—would also have made him enormously popular, not to mention consequential and successful. It might even have spared him the electoral comeuppance he received in 2010, and whose second installment he seems likely to take delivery on just a few weeks from now.

7 thoughts on “Krugman in Rolling Stone”