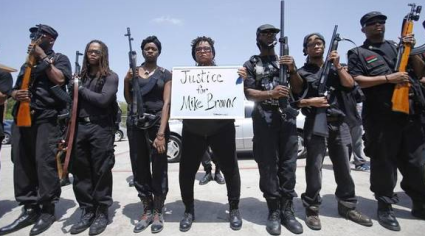 Good. This must be driving those Dallas cops crazy:

They call themselves the Huey P. Newton Gun Club, named after the co-founder of the Black Panther Party For Self Defense. Like the defunct organization which called for reform of community policing, demanding that police come from the neighborhoods they serve, the Huey P. Newton Gun Club says they are marching “to promote self-defense and community policing” in response to the recent high profile stories about police shooting unarmed African Americans across the country.

To the protesters, “community policing” is more than just a word. Communities should be protected by members of the community, and held accountable. Ironically this was the original vision for community policing, articulated in 1812 by Sir Robert Peel. That’s right, it may surprise many to discover that our communities have only had police as we know them for a little over 200 years. Even then, it took a little while for Peel’s concept of police forces to make its way to the United States. Since then it has become a norm that many cannot imagine a time before.

In Texas, the Huey P. Newton Gun Club are following in the footsteps of Newton, who was a law major, striving to stay within the bounds of legality. Though the historical Black Panthers had a notable slip-up which led to then Governor Ronald Reagan signing the Mulford Act which prohibited carrying loaded guns in public space. The goal of the Panthers, as they explained it, was to assert the rights of the people to defend themselves against corrupt police, within the bounds of the law. The Huey P. Newton Gun Club says that’s exactly what they are doing today with their open carry protests.

Police have kept a close eye on the protesters, while also trying to keep their distance. One officer we talked to said “there’s really nothing we can do about it. Open carry protests are not against the law.”