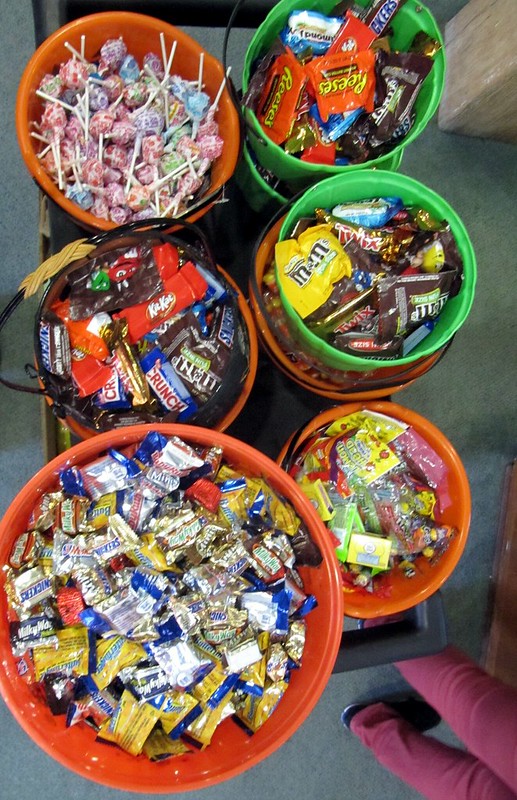 I have some neighbors like this. There are a couple of churches who bus kids into our neighborhood BECAUSE THEIR NEIGHBORHOOD ISN’T SAFE. They can’t even play outside, let alone trick or treat. So I love Prudie’s response:

Dear Prudence,
I live in one of the wealthiest neighborhoods in the country, but on one of the more “modest” streets—mostly doctors and lawyers and family business owners. (A few blocks away are billionaires, families with famous last names, media moguls, etc.) I have noticed that on Halloween, what seems like 75 percent of the trick-or-treaters are clearly not from this neighborhood. Kids arrive in overflowing cars from less fortunate areas. I feel this is inappropriate. Halloween isn’t a social service or a charity in which I have to buy candy for less fortunate children. Obviously this makes me feel like a terrible person, because what’s the big deal about making less fortunate kids happy on a holiday? But it just bugs me, because we already pay more than enough taxes toward actual social services. Should Halloween be a neighborhood activity, or is it legitimately a free-for-all in which people hunt down the best candy grounds for their kids?

—Halloween for the 99 Percent

Dear 99,
In the urban neighborhood where I used to live, families who were not from the immediate area would come in fairly large groups to trick-or-treat on our streets, which were safe, well-lit, and full of people overstocked with candy. It was delightful to see the little mermaids, spider-men, ghosts, and the occasional axe murderer excitedly run up and down our front steps, having the time of their lives. So we’d spend an extra $20 to make sure we had enough candy for kids who weren’t as fortunate as ours. There you are, 99, on the impoverished side of Greenwich or Beverly Hills, with the other struggling lawyers, doctors, and business owners. Your whine makes me kind of wish that people from the actual poor side of town come this year not with scary costumes but with real pitchforks. Stop being callous and miserly and go to Costco, you cheapskate, and get enough candy to fill the bags of the kids who come one day a year to marvel at how the 1 percent live.