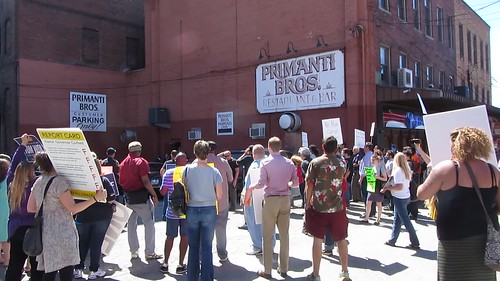 Wow, this sounds like the same corporate stance the shitty Journal-Register chain I once worked for had. The ed board was told they had to endorse Bush — “or no one.” Personally, I have never seen an election swayed by an endorsement, but they sure do look persuasive in those TV ads, right?

This is the time of year when newspapers start to endorse candidates. Corbett got the Pittsburgh Tribune-Review, no surprise given its conservative ownership. Wolf got the Harrisburg Patriot/Penn Live nod, which is prestigious because it’s the state capital’s daily.

The strange one is the Philadelphia Inquirer and Daily News, which are owned by the same company and are not endorsing in the race. Owner and publisher H.F. “Gerry” Lenfest wrote in yesterday’s Inquirer that he’s decided the papers shouldn’t endorse a candidate, and has instead asked the editorial boards to “provide a summary of where the candidates stand on the critical issues facing the state, as well as the positions each paper has taken on those issues, and then let the voters decide who they think is most qualified.”

Missing from Lenfest’s piece: The fact that he gave Corbett a $250,000 campaign contribution. Bad show.

Considering that both papers have been kicking Corbett’s ass up and down the street on school funding and fracking, this is a tad peculiar.

One thought on “Inky, Daily News punt on endorsements”