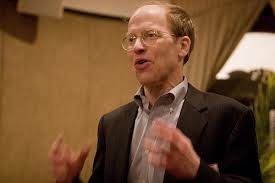 Interview with Tom Geoghegan, a very smart and savvy labor attorney and writer:

Timothy Noah: Your book appears at a notably bleak moment for the labor movement. Union density has fallen below 7 percent in the private sector. In the midterms, the AFL-CIO targeted six Republican governors and managed to defeat only one. Nearly half of all states are now “right-to-work,” meaning workers don’t have to pay union dues or their equivalent to a union that bargains collectively on their behalf. Would it be fair to describe this book as a last-ditch effort?

Thomas Geoghegan: For labor, it’s past the last-ditch stage. I think of it as a last-ditch effort for the Democrats. I’d say the book is addressed not just to labor but to the Democratic party — and to the left in general. Without a real labor movement in place, the Democrats will not be the party of the working people. And until it is such a party, it will not be a governing party.

At least in my view, the GOP is just not able to be a governing party — to stop the decay in our institutions, the continued growth in inequality, and a kind of hopelessness among people who just feel abandoned by our institutions — our political ones, corporate ones, and, yes, often labor too.

Labor’s real electoral weakness — which the midterms exposed — is not so much that it couldn’t knock out [Gov. Scott] Walker in Wisconsin. Its real weakness is that it can’t get the Democratic party to present itself as a party with an express commitment to raising wages and benefits for all Americans, including the middle class. This is at a time when even the middle class have stagnant wages, no savings, no private pensions, and we still depend on people going into significant debt to keep up demand.

TN: You recommend that labor stage protests targeted not at Republicans but at Democrats, and cite the 2012 Chicago teacher’s strike as an example. Can you elaborate?

TG: I think the Chicago teachers strike was a kind of paradigm strike — it really forced Democrats to decide whether the party was to be a neoliberal, corporate-friendly party or a the old time Democratic party for working people — it was symbolically a strike not just against privatization but against shortchanging kids on school books, teachers, and – yes – mental health professionals. For all the spurious talk of how the party believes in education, the Democratic establishment here has protected the business interests in this big global financial center from paying for the education of minority race poor children.

I tried to compare the situation of labor today to that of the civil rights movement in the early 1960s: labor has to force the national Democrats to take sides. The Kennedy administration did not want to take sides, but King and others forced them. Likewise, the party is happy to pay lip service to a higher minimum wage, but it does not want to take sides against business CEOs on the bigger issues of workplace democracy and higher wages and benefits. Well, we have to create situations like the Chicago teachers’ strike where the party has to take one side or other, just as John and Robert Kennedy were forced to do.

TN: You support the pro-labor left’s agenda on unions and the workplace — higher wages, fewer layoffs, more voice for workers in management decision-making — but your strategies for getting there are a bit unorthodox. The one likeliest to upset labor and the left — and to delight the right — is to accept the right’s demand for a national right-to-work law — that is, a law that frees workers from any legal obligation to pay union dues or their equivalent to a union that bargains collectively on their behalf. You’d accept that in exchange for passing a statute that defines the right to organize as a civil right under the 1964 Civil Rights Act. Explain why that would be a worthwhile trade.