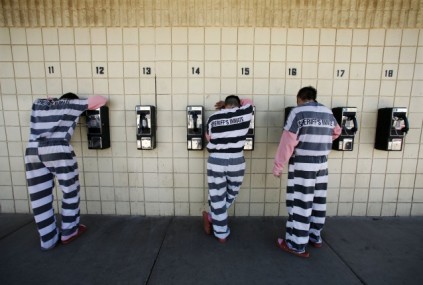 This might be one of the most maddening things I’ve ever read, and God knows, I’ve read a lot of them. May these people get what’s coming to them:

With federal action expected this summer to regulate the cost of prison phone calls, the National Sheriffs’ Association announced they may “significantly limit or eliminate altogether” the right of prisoners to make those calls.

Incarcerated people and their families — who are disproportionately low-income — have fought for decades against the often exorbitant rates charged for a phone call home by companies that hold exclusive contracts and provide kickbacks to the jails themselves.

In 2013, they appeared to win a major victory when the Federal Communications Commission (FCC) passed an interim rule to cap the cost of calls between states at 25 cents per minute — meaning 15-minute calls that used to be as high as $17 could no longer cost more than $3.25. In announcing the change, the FCC said the current fee structure is “unjust and unreasonable.”

But this reform has sparked a revolt from those who benefited financially from the old system: the prison phone industry that makes more than a billion a year in profits, and the state and county governments that get “commissions” from those calls that they use to pad their budget. In some states, commissions make up as much as 94 percent of the cost of the call, funneling millions of dollars to cash-strapped local jurisdictions.

Deborah Golden, an attorney with the DC Prisoners’ Rights Project, told ThinkProgress she views these commissions as “another tax on poor people and people of color.”

“Our main plaintiff Martha Wright, who sadly passed away last year, was often forced to choose between medicine, food and calling the prison to talk to the grandson she raised,” said Golden. “These are stories we hear over and over from people. The vast majority of prisoners don’t come from rich families. They’re trying to get by every single day, and a 15 minute phone call even once a month is a real strain in their budget.”

One thought on “Because the kickbacks have to come from somewhere, right?”