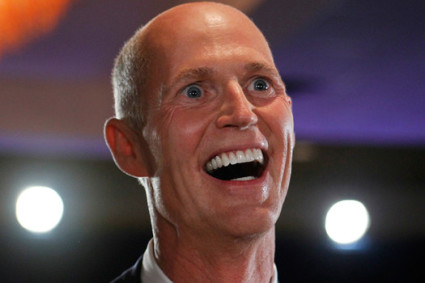 But you probably already knew that! Also, a douchebag:

In early 2013, Florida Gov. Rick Scott (R) surprised nearly everyone by announcing he’d changed his mind about Medicaid expansion through the Affordable Care Act. The Republican governor had long condemned the idea, but he apparently had a change of heart.
“I cannot, in good conscience, deny the uninsured access to care,” he said at the time. Scott added that Medicaid expansion is “a compassionate, common sense step forward.” The governor even referenced the death of his mother when explaining his rationale.
“A few months ago, my mother passed away, and I lost one of the only constants in my life,” Scott said. “Losing someone so close to you puts everything in new perspective … especially the big decisions…. As I wrestled with this decision, I thought about my Mom’s struggles raising five kids with very little money.”
That was February 2013. In April 2015, Scott reversed course again, announcing his renewed opposition to the policy he’d endorsed. And today, the local CBS affiliate in Miami reports that that the governor offered an unexpected explanation for his posture two years ago.

Scott conceded this week that was all a ruse. He now says his support for Medicaid expansion was a calculated move designed to win support from the Obama administration for the state’s proposal to hand over control of Medicaid to private insurance companies. At the time, he denied that his support was tied to a deal with the federal government.
Now that he’s succeeded in privatizing Medicaid, Scott is again railing against Medicaid expansion and is suing the federal government for allegedly forcing it on him.