Here’s a graphic of the results of a new Quinnipiac poll …. 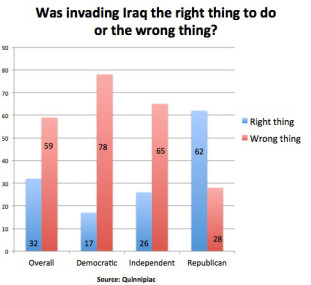 Jay Bookman at the AJC…

It’s not a surprise that Republicans remain more supportive than most Americans of a war initiated and led by a Republican administration. But the scale of the divergence between Republicans and their fellow Americans is pretty stunning. To this day, and by more than a two-to-one ratio, Republicans still believe that the war was a good idea.

Or at least they say they believe that. Given the blowback from the war, I have to think that some of those 62 percent are acting out of sheer cussedness in refusing to admit the mistake to a pollster. But Republican pollsters are probably producing similar numbers in their own internal surveys, which helps to explain the awkward straddling act by their candidates. It tells you a lot about what the GOP base will be demanding from a potential nominee.

And that is not good news for Rand Paul.

In my unscientific polling around social media, many of my Right of Center friends in the sea of Red I live in prefer really not to discuss this particular topic much. If they do, there is some kind of twisted logic that it was all Hillary’s fault… or something.

3 thoughts on “Was Invading Iraq the Right Thing to Do?”