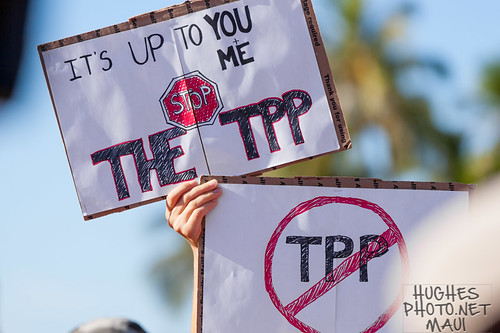 This is pretty scary. It’s specifically about Canada, but I imagine the principal applies to all parties in that iteration of the TPP, so it may affect NPR and PBS — not to mention the postal service:

A secret letter leaked by WikiLeaks on Wednesday reveals that the Canadian Broadcasting Corporation (CBC) and Canada Post could be sold under the Trans-Pacific Partnership (TPP) agreement, being negotiated by Canada and 11 other countries this week in Maui, Hawaii.

The leaked document was prepared for a TPP Ministerial Meeting held in Singapore in December, 2013. According to the whistle-blowing website, the document “indicates a wide-ranging privatisation and globalisation strategy” whose main aim is to undermine state-owned enterprises (SOEs) – publicly owned corporations whose mandate is to deliver the public good with no or minimal commercial considerations. That will change under the TPP.

“Even an SOE that exists to fulfil a public function neglected by the market or which is a natural monopoly would nevertheless be forced to act ‘on the basis of commercial considerations’,” said WikiLeaks in a press release introducing the leak. “Foreign companies would be given standing to sue SOEs in domestic courts for perceived departures from the strictures of the TPP, and countries could even be sued by other TPP countries, or by private companies from those countries.”

One thought on “For-profits only”