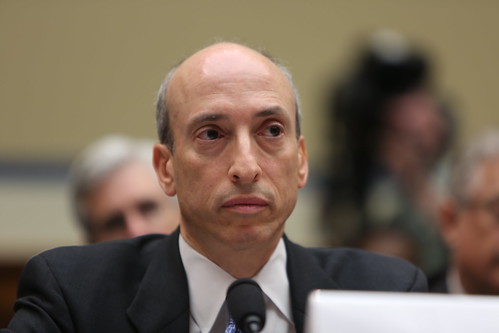 This is an interesting approach, I think. I doubt it’ll work, but it’s certainly interesting. And Gary Gensler is an honest-to-good Wall Street reformer, so I’m inclined to respect him:

Davenport, Iowa (CNN)—Hillary Clinton’s presidential campaign sought to turn a potential liability into a strength on Monday, goading rival Bernie Sanders into a fight ahead of his Wall Street reform roll out speech on Tuesday in New York.

Gary Gensler, Clinton’s chief financial adviser, accused Sanders of taking a “hand-off approach” to some of the largest banking entities and encouraging him to “endorse” Clinton’s plan on Wall Street reform instead of rolling out his own.

“Any plan to further reform our financial system must include strong provisions to tackle risks in the ‘shadow banking’ sector, which remains a critical source of potential instability in our economy,” Gensler, a former chair of the Commodity Futures Trading Commission, said in a statement to CNN. “Unfortunately, Sen. Sanders has so far taken a hands-off approach to some of the riskiest institutions and activities in our economy, which were among the biggest culprits during the 2008 crisis.”

Sanders will deliver what his campaign is branding as a “major policy address on Wall Street reform and financial policy” Tuesday in New York. Gensler said Sanders should “go beyond his existing plans for reforming Wall Street and endorse Hillary Clinton’s tough, comprehensive proposals to rein in risky behavior within the shadow banking sector.”

2 thoughts on “Banking on Bernie”