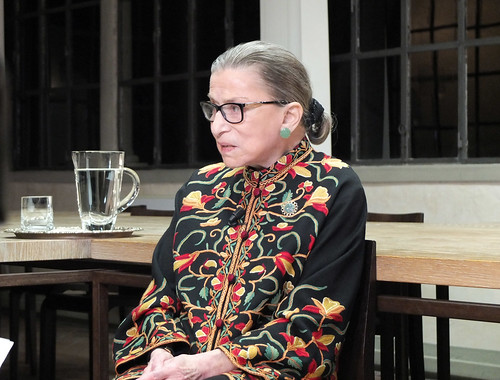 In the Supreme Court hearing on new Texas abortion laws:

Seconds after Texas Solicitor General Scott Keller began to speak Wednesday morning, Justice Ruth Bader Ginsburg zeroed in on the “undue burden” question—quickly and mercilessly knocking Keller off balance and setting the tone for the rest of his nearly 40 minutes at the lectern. Ginsburg asked Keller how many women would live 100 miles or more from a clinic if the Texas law went into effect. About 25 percent, he responded—but that didn’t include the clinic in Santa Teresa, New Mexico, just over the border from El Paso. The existence of this clinic featured heavily in the 5th Circuit’s decision to uphold the Texas statute; it asserted that the law did not impose on “undue burden” on abortion-seeking El Paso women, because they could simply cross state lines for the procedure.

“That’s odd that you point to the New Mexico facility,” Ginsburg said, in a clear and firm voice. New Mexico, after all, doesn’t force abortion clinics to meet the same standards that Texas would—standards which, Texas claims, are absolutely critical to protect women.

“So if your argument is right,” Ginsburg continued, “then New Mexico is not an available way out for Texas, because Texas says: To protect our women, we need these things. But send them off to New Mexico,” to clinics with more lenient standards, “and that’s perfectly all right.”

One thought on “In which Ruth Bader Ginsburg nails it”