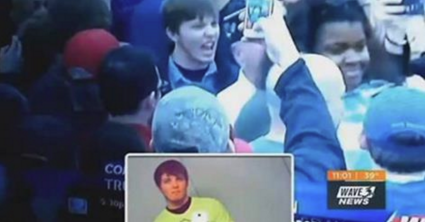 A recent viral video from a Donald Trump rally in Louisville, KY, showed several people angrily shoving and attacking a young black woman, Shiya Nwangum, as she calmly moves towards the exit. Despite telling the crowd “Stop touching me,” they continued their beratement. Nwangum was not seriously injured in the event, and according to an interview with WLKY afterward, she was “doing well” and was “just trying to process everything.”

Joseph Pryor is one of the men who can be seen screaming in the video, and he posted a screenshot of himself screaming at the woman as his Facebook cover photo, apparently quite proud of his hateful act. Word of his actions reached his superiors, and he was promptly released from the Marine Corps training program he was attending.
The Marine Corps Recruiting Station in Louisville released this statement to announce the reasoning for their decision:

“Joseph Pryor demonstrated poor judgment in his use of social media that associates him with a racially charged altercation at a political rally. Hatred toward any group of individuals is not tolerated in the Marine Corps and he is being discharged from our delayed entry program effective yesterday.”

Joseph Pryor was not yet an actual member of the Marine Corps, as the delayed entry program is a training program to prepare recruits for actual boot camp. Joseph Pryor has listed himself on his Facebook page as a “future Marine.”

There is, of course, now a fan page on Facebook.

One thought on “Not going to be a Marine”