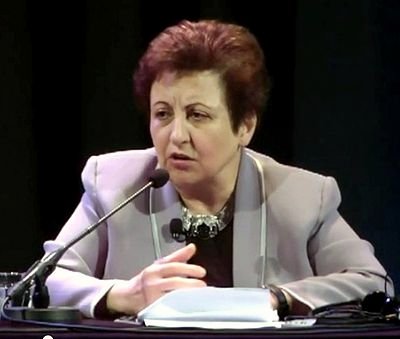 with the story of how Iranian agents set up her
husband with another woman, threatened to stone him to death and then forced him to denounce her:

“Now Ebadi can see the result of her activities,” the agent told him grandly. “I warned her so many times. So many times I told her, ‘You need to shut up.’ But she never listened.”

Javad had never been involved in my cases; he was not political. “Why should I be responsible for what my wife does?” he asked them. “What kind of dirty games are you trying to play with me? Because of my wife, you harass me like this, in the name of Islam?”

The agent’s eyes darkened. He lunged toward Javad, punching him, kicking him savagely.

“Don’t you dare ever mention Islam again, do you hear me? The word ‘Islam’ is dirty in your mouth.”

The intelligence agent said I had been proud; now I would see my weakness.

When Javad saw that pleading or protesting would only provoke more beating, he asked what it was they wanted.

For the first time, the agent’s boss spoke. He explained the problem:

“If you’re still defending your wife, it means you’re her ally and collaborator. And you should be punished as such. If the truth is otherwise, you need to prove that to us.”

All he had to do in order to gain his freedom was to read a short statement in front of a camera:

“Shirin Ebadi did not deserve to receive the Nobel Prize. She was awarded the prize so that she could help topple the Islamic Republic. She is a supporter of the West, particularly America. Her work is not in the service of Iranians, but serves the interests of foreign imperialists who seek to weaken Iran.”

He knew immediately he would do it. Surely, everyone would know that he had been pressured into saying those things.

One thought on “The lengths to which regimes will go”