Fifty years later, why are the National Archives still refusing to release the rest of the documents from the Kennedy assassination?

Not that we didn’t already know, but it’s nice to be validated. Via WhoWhatWhy:

In this stunning but little-known speech from 2007, Gen. Wesley Clark claims America underwent a “policy coup” at the time of the 9/11 attacks. In this video, he reveals that, right after 9/11, he was privy to information contained in a classified memo: US plans to attack and remove governments in seven countries over five years: Iraq, Syria, Lebanon, Libya, Somalia, Sudan and Iran.

He was told: “We learned that we can use our military without being challenged …. We’ve got about five years to clean up the Soviet client regimes before another superpower comes along and challenges us.”

In which he asserts our right to kill anyone we want without any pesky legal trappings. Charlie Pierce explains just how lawless this is.

Egyptian women against the military’s treatment of female protesters.

The Egyptian army just went through the square, beating protesters and setting tents on fire. 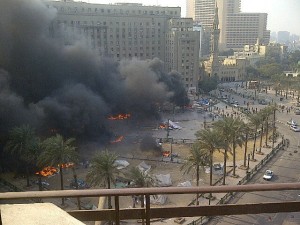 It was a nice surprise to see a smidgeon of actual history in a newspaper — an explanation in the NYT for Iran’s deep hostility toward Britain, providing context for the story of the storming of the British Embassy earlier this week. More here.

The mainstream media are shrugging at Lawrence Wilkerson, Colin Powell’s former chief of staff, who has started an interesting campaign to bring Dick Cheney to justice for war crimes…

My Michael Jacksonian compound was breached, and my precious photos of Leezza were stolen and defiled by marauding desert rats. Can you get me a book contract?

Ignore the jobless, kick people out of their homes, starve the kids. These consequences are grim but acceptable. The one thing we cannot afford, you slimy Congresspeople, is to cut the Defense budget. Doing so might set off a “doomsday mechanism,” perhaps identical to the doomsday machine dreamed up by the Soviets in Dr. Strangelove.

If you have the stomach, go read how Obama turned against whistleblowers and launched a crusade against leaks:

Jack Balkin, a liberal law professor at Yale, agrees that the increase in leak prosecutions is part of a larger transformation. ”

We are witnessing the bipartisan normalization and legitimization of a national-surveillance state,” he says. In his view, zealous leak prosecutions are consonant with other political shifts since 9/11: the emergence of a vast new security bureaucracy, in which at least two and a half million people hold confidential, secret, or top-secret clearances; huge expenditures on electronic monitoring, along with a reinterpretation of the law in order to sanction it; and corporate partnerships with the government that have transformed the counterterrorism industry into a powerful lobbying force. Obama, Balkin says, has “systematically adopted policies consistent with the second term of the Bush Administration.”