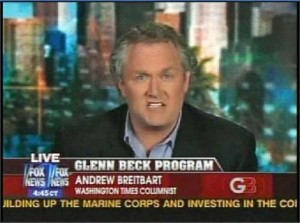 I can’t do anything about the media, or the gutless administration, but I can remind you that whenever a scandal is ginned up like this by the right-wing attack machine, IT IS ALWAYS A LIE. It may be a lie wrapped around a minute speck of truth, but that only makes the lie more plausible. It is still a lie. Believe it.

And the lazy, fawning excuse of a national press corps who willingly swallows whatever regurgitated swill the right wing feeds them — well, I think we all know by now not to listen to them. If it wasn’t for the liberal bloggers who got right to work on this Shirley Sherrod story, we still wouldn’t know the truth. (Just as few of the national media have admitted how wrong they were about the ACORN “scandal” — fabricated by the exact same people.)

Andrew Breitbart? He’s a lying piece of shit, a man completely without honor. Fuck him and his constant whining. “I’m not a racist, my adopted sister is a Mexican!”

You know what really pisses me off about this story? Shirley Sherrod’s father was killed by a white farmer. Now, she’s been destroyed by the same kind of people — only this time, they used some editing software and a right wing attack machine to do it.