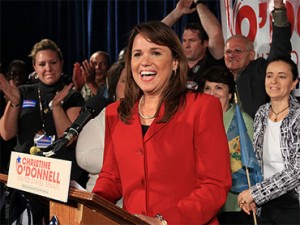 CREW is calling for a criminal investigation into her use of campaign funds, so it looks like Christine O’Donnell will have a lot of explaining to do.

But last night I interviewed a high school classmate of hers, a 37-year-old immigration attorney in Texas named Laurel Scott who gave me a new perspective on O’Donnell’s candidacy — or “Chris,” as she called her

“We both came from large families. My older sister was friends with her, her little sister was in my class. The person I knew in high school was a wonderful, wonderful person. She’s a sweet person. Even though I don’t agree with what she stands for politically, I have to say that,” she said.

She said O’Donnell’s family was “very liberal, I’m surprised she’s gone over to the Tea Party. Moorestown a town of progressive Republicans, very feminist. You were expected to excel in math, for instance.”

But, as she points out, “It was a very wealthy town, and she was not from a wealthy family. I know there were situations where that was uncomfortable for her.”

She also knew Christine because they both hung out with the “very liberal” theater crowd. “The whole witchcraft thing has been blown out of proportion. If she did anything, all she did was dabble. She wasn’t into anything dark or illegal, very open, very honest very sincere – and I’m a Democrat,” she reminded me.

“I always found her to be very inclusive, she didn’t shut anybody out. She may have dabbled, but she may have done it and then just stopped. I think in your late teens, early twenties, it’s healthy to try things,” Scott added.

“I disagree with her [positions], but I think her personality would be very refreshing in politics. She’s not a millionaire like most of the people in Congress, she doesn’t come from money,” she said. (Well, I can’t argue with the idea that it would be refreshing to have someone in politics who relates to being poor.)

“She was not the smartest,” Scott said. “Not unintelligent, but it wasn’t one of the attributes you’d ascribe to her. But she had some very strong leadership qualities.”

So here’s what I’m thinking: Due to the many economic hurdles presented by the elite Democratic classes, it’s almost impossible for working-class activists to move up to the policy and strategy ranks. The only realistic route for lower-class people with leadership qualities are via conservative Republican politics.

And the Republicans do walk the talk. Their organizations have numerous programs to develop leadership qualities among the bottom ranks, programs where people don’t have to worry about having the money to pay for it. The difference, I think, is that Republican donors are willing to subsidize that kind of long-term strategy — and most Democrats aren’t. Democrats seem to think you can only be a leader if you’re a lawyer, a member of the military, or a college professor.

So whenever some attractive new populist face comes along, it’s almost inevitably a Republican — and that’s a problem. What are we going to do about it?

4 thoughts on “The New Adventures of The Old Christine”