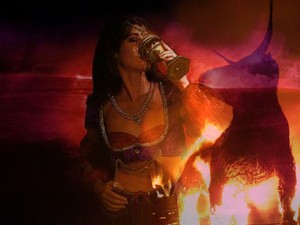 By Susie
When I was 18, I worked for a publishing company that was a little bit strange. The female department head was a fundamentalist Christian and a member of Jews for Jesus who used to hold Tuesday morning prayer meetings before work. It was well known that if you never did attend a prayer meeting, you could forget about ever getting a raise.

My immediate supervisor was a young woman named Janice. One morning, while Janice was in the restroom, the department head went rummaging in her purse and found her birth control pills. Instead of talking to her, she called all the editorial clerks and assistants into her department and announced that we were no longer permitted to socialize with the editors, and that we were nothing more than “Jezebels, sluts and whores of Babylon”. (I found this particularly ironic since one of my co-workers graduated from a genteel and well-known Southern women’s Christian college. She’d confided in me that both her father and grandfather—church elders—had raped her. The father raped her shortly after she tearfully confided in him that she’d been raped by her grandfather. “The family that prays together”, etc. …)

The department head also announced that if it was discovered that anyone was using birth control pills, she would be fired immediately. And that if anyone didn’t like it, well, she could just resign.

So I went back to my desk and typed up a resignation letter. I also took another piece of paper, drew a swastika and taped it to the department head’s door. (What can I say? I was young.)

This was my introduction to the fact that there are these kinds of people in the world. And now the modern Republican party has adopted the untrammeled craziness that was my former department head. For evidence, see this from the Jezebel blog—yet another draconian, slut-shaming (and most likely illegal) law proposed in a Republican state:

A proposed new law in Arizona would give employers the power to request that women being prescribed birth control pills provide proof that they’re using it for non-sexual reasons. And because Arizona’s an at-will employment state, that means that bosses critical of their female employees’ sex lives could fire them as a result. If we could harness the power of the crappy ideas coming out of the state of Arizona, we could probably power a rocket ship to the moon, where there are no Mexicans or fertile wombs and everyone can be free to be as mean a cranky a**hole as they want at all times! Arizona Heaven!

Yesterday, a Senate Judiciary Committee endorsed Republican Debbie Lesko’s HB2625 by a vote of 6-2, which would allow an employer to request proof that a woman using insurance to buy birth control was being prescribed the birth control for reasons other than not wanting to get pregnant. It’s all about freedom, she said, echoing everyone who thinks there’s nothing ironic about claiming that a country that’s “free” allows people’s bosses to dictate what medical care is available to them through insurance. First amendment. The constitution. Rights of religious people to practice the treasured tenets of their faiths, the tenets that dictate that religious people get to tell everyone who is not of faith how they’re supposed to live, and the freedom to have that faith enforced by law. Freedom®.

Further, Lesko states, with a straight face, that this bill is necessary because “we live in America; we don’t live in the Soviet Union.”