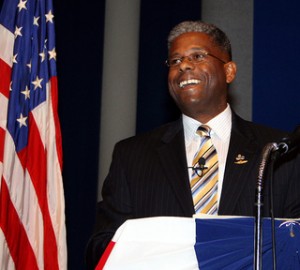 U.S. Congressman Allen West of South Florida at a rally yesterday at Florida Atlantic University made the claim that 80 members of Congress are members of the Communist Party. West offered no names or evidence, but, later said he was referring to the Congressional Progressive Caucus.

Congressman West is some what known for his outrageous claims including stating that, “If Joseph Goebbels was around, he’d be very proud of the Democrat party, because they have an incredible propaganda machine.” He also claimed he was the modern Harriet Tubman. “So I’m here as the modern-day Harriet Tubman, to kind of lead people on the Underground Railroad, away from that plantation into a sense of sensibility.”

There is strong support among Tea Party members for West to be the GOP nominee for vice president. His outspoken ways are clearly admired by the Tea Party. However, a GOP insider said that is very unlikely because he would be very hard to control in a campaign setting.

West, considered a war hero by some, was relieved from military duty in 2004 after an attempted murder investigation involving an Iraqi officer that ended his 22 year career.

Update and correction: West’s office said in a statement to CBSMiami.com:

I previously written Congressman himself said he was referring to the Congressional Caucus.