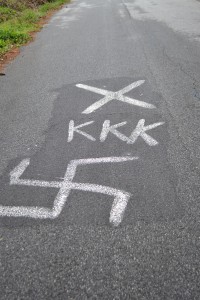 I returned from my trip earlier in the week to find this little love note up the street from my house. I drove by it and it didn’t really register until I pulled in to my driveway.

“Wait a minute, ” I thought. I backed of of the driveway to take a second look. This was right across the street from my neighbor’s driveway. I asked her when this happened and she replied on Monday.

The city came out the next day to cover it up. They must have used the wrong kind of paint because it washed away in the rains and the picture shows the result. She reported this to the police, but, no one came out to talk to her. Just a report over the phone.

This is a fairly small bedroom community in the metro Atlanta area, so access to city officials is easy. I called the city manager yesterday and told him what had happened. He replied that my call was the first time he had heard about this. I was assured that he would have a crew out as soon as possible.

A phone call to the City Police was not very informative. I asked several questions if this was isolated, when it was reported and so on. There had been two reports made. “Have this been looked into further?” I asked. “I don’t think so, no indication,” I was told. “Probably just some kids vandalizing.”

I called the local paper and talked to the crime reporter if he knew of any other incidences. “I didn’t even know about this one!” he said. The reporter came out to our street and we had a conversation.

I know. It is a distressed neighborhood. Quite a few abandoned and foreclosed homes are on the street.

A few folks have said to me it was probably kids. Very high possibility, as the street is a good place to skateboard. (Skateboarding is not a crime.) Even if it was some kids, that doesn’t change the severity or seriousness of this. Some experts say that this can be a precursor to violence in the future.

Living in the metro Atlanta area, I have seen graffiti of all sorts through the years. Skin Heads scrawl all kinds of hateful messages and I just cringe.

But, if it was kids or not, I was just bothered by the cavalier attitude by the City Police.