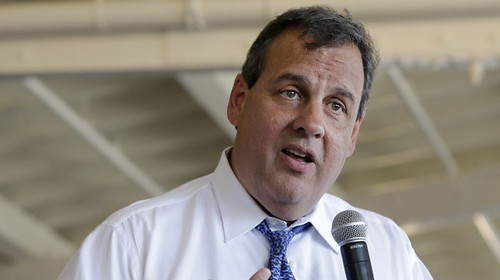 Well, there you have it: A prominent Republican admitting the GOP needs to control voting machines — er, “mechanisms” to win! Chris Christie spells out the consequences of putting Democrats in the governors’ mansions: Accurate vote counts.

Governor Christie pushed further into the contentious debate over voting rights than ever before, saying Tuesday that Republicans need to win gubernatorial races this year so that they’re the ones controlling “voting mechanisms” going into the next presidential election.

Republican governors are facing intense fights in the courts over laws they pushed that require specific identification in order to vote and that reduce early voting opportunities. Critics say those laws sharply curtail the numbers of poor and minority voters, who would likely vote for Democrats. Christie — who vetoed a bill to extend early voting in New Jersey — is campaigning for many of those governors now as he considers a run for president in 2016.

Christie stressed the need to keep Republicans in charge of states — and overseeing state-level voting regulations — ahead of the next presidential election. Christie made his push at a U.S. Chamber of Commerce event in Washington, D.C., where he ran down a list of states he’s spent time in recently as chairman of the Republican Governors Association questioning whether a Republican presidential nominee would rather have the incumbent GOP governor in power or the Democratic challenger.

Christie’s remarks Tuesday came on another day of intense campaigning for Republican candidates and featured another attack on Democrats and President Obama, this time on raising the minimum wage, an issue, like stricter voting identification requirements, that appeals to conservative voters who hold sway in presidential primaries.

3 thoughts on “They have to cheat to win”