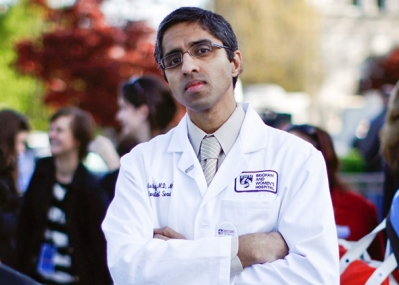 After the NRA put a target on his back:

The Senate narrowly confirmed a new surgeon general whose nomination was delayed for months in a fight over his comments alleging that guns are public health issue. The confirmation represents a victory for gun control advocates, even as recent polling has shown Americans moving in the other direction toward gun-rights protections.

The Senate’s 51-43 vote confirming Massachusetts Doctor Vivek Murthy as the next surgeon general marks the end of a protracted fight over gun control and Murthy’s views on it. Murthy, who will be the first Indian-American Surgeon General to serve in the U.S., waited more than a year for Senate confirmation after the National Rifle Association and other pro-gun groups threatened to throw their resources against members supporting his nomination. Senate Majority Leader Harry Reid determined earlier this year that he couldn’t put his red-state members in that position before the 2014 midterm elections and shuffled Murthy to the back of the nominations pile.