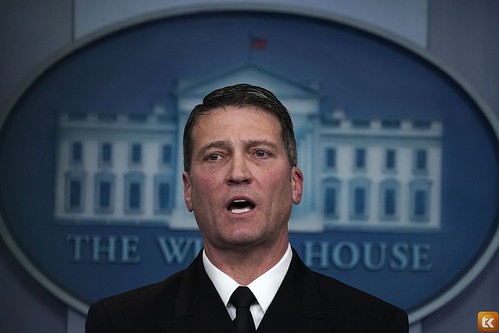 You all remember Ronny Jackson — he’s the White House Naval physician who said how healthy Trump is, and declared him free of cognitive impairment! Now we’re getting a broader picture after Trump chose him for VA chief:

More "concerns" popping up about #RonnyJackson according to Senators on both sides of the aisles. There are mentions of impropriety at various stages in his career as well, we now here, concern about his management of the (relatively small) WH medical staff. #Maddow https://t.co/IRdzIgBV7u

#RonnyJackson is Trump’s pick to head VA. New allegations include mismanagement in prior job: drinking on the job, inappropriate dispensing of meds and abusive work environment.

REMINDER: this is he doctor that gave Trump a physical and said he was he fittest president ever.

This man is unqualified for this job. This administration is uninterested in expertise. It is about loyalty and subservience. #VA #RonnyJackson #ConditionNews https://t.co/yFoZcxOV39

If confirmed, Ronny Jackson, a @USNavy rear admiral who led a small team of surgeons in Iraq and now heads a staff of 70 at the White House, would take the reins of an agency of more than 375,000 employees and a budget of more than $185 billion. https://t.co/FAR6gm2rFm

One thought on “V.A. nominee under fire”