To highlight Juneteenth, I was commissioned by the New Yorker to illustrate the cover!The words of historian Mitch Kachun can resonate with all of us that day: “celebrations of the end of slavery should have three goals: to celebrate, to educate, and to agitate.”#juneteenth2022 pic.twitter.com/LlZjQPNcSB On Memorial Day, we observe the deaths of soldiers because they died “for our freedom.” We should add an observance for all the people who died of gun violence because, at least according to the politicians, they also “died for our freedom.” (You know, the freedom to accept large cash donations from the gun lobby.)

I’ve said for years that people who live outside major cities have a very different perspective on guns. (As you’ve seen here from my friend Boohunney.) Here, they’re nothing but weapons of death and destruction. We don’t hunt deer on the streets of Philadelphia, we hunt human beings.

And of course, we have the inevitable reality of the people who die from stray bullets. At least once a month, someone dies here in their bedroom or while playing video games when a bullet blows through the brick walls of a house.

We have mass shootings almost every day. But for some reason, they don’t make the national news. Just another drive-by shooting, just another dispute between drug gangs.

And more funerals for young men who haven’t even graduated high school. It makes me so sad.

This is just the past few days. I probably missed some:

Man, 49, shot in the back and killed in North Philadelphia

“White Americans must recognize that justice for black people cannot be achieved without radical changes in the structure of our society…The evils of capitalism are as real as the evils of militarism and racism…”Nikole Hannah-Jones, author of the 1619 Project, is also one of the most interesting people on Twitter. Here’s what happened to her when she was invited to speak on Martin Luther King day:

So, I scrapped my original speech and spent the entire first half of it reading excerpts from a bunch of Dr. King's speeches, but without telling anyone that I was doing so, leading the audience to think King's words were mine. And, whew, chile, it was AMAZING.

Wherever you see Black in caps, it's bc I subbed out Negro to not give it away."For more than 200 years Africa was raped and plundered, a native kingdom disorganized, the people and rulers demoralized and throughout slavery the BLACK slaves were treated in a very inhuman form…"

Read the whole thing. Hats off to you, professor! 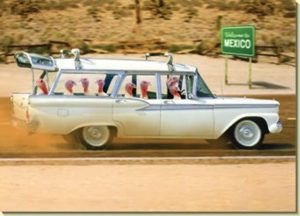 From the Boohunney State Park Lodge and  Resort I wish all of you a very Happy Thanksgiving!